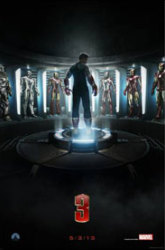 Becky and I went to see Iron Man 3 last Friday with my Mom and Dad and our three kids at the AMC Theater at Highlands Ranch, CO. The MovieFone website at Iron Man 3 describes the movie as follows…

“Marvel’s ‘Iron Man 3’ pits brash-but-brilliant industrialist Tony Stark/Iron Man against an enemy whose reach knows no bounds. When Stark finds his personal world destroyed at his enemy’s hands, he embarks on a harrowing quest to find those responsible. This journey, at every turn, will test his mettle. With his back against the wall, Stark is left to survive by his own devices, relying on his ingenuity and instincts to protect those closest to him. As he fights his way back, Stark discovers the answer to the question that has secretly haunted him: does the man make the suit or does the suit make the man?…”

The Review:  Iron Man 3 is a fun film, if you’re a fan of the Iron Man series and Marvel Super Hero movies.  If you’re not a fan of these movies, then you probably are not going to like it that much.  It’s a continuation of the saga for Tony Stark with more twists and turns than the previous films, including the bad guy, who is much worse than the previous bad guys that he’s faced.  With the exception of The Avengers film that comes into play with this movie where he had to face aliens with super powers, but he had help from all of The Avengers, where this time he has to match wits with a brilliant villain.

The story is pretty good this time around with a person from Tony’s past coming to haunt him.  I liked the way they used a character actor to hide the real bad guy in the movie, which was pretty clever.  He also had to face another genius like himself that made it much more entertaining and interesting compared to most bad guys that are more brawn than brain.

We are all fans of the Iron Man series, so we all thought it was a great blockbuster for the year and it’s proving to do extremely well at the box office.  Most people that I’ve spoken to who have seen the film liked it.  It’s not over the top fantastic, since it’s a sequel, but it’s definitely worth the price of admission for some good entertainment.