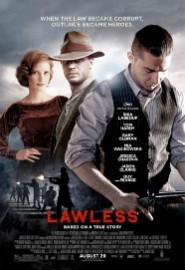 Becky and I went to see the movie Lawless last night with our friend Michelle at the AMC Theater in Castle Rock, CO.  I’m really far behind on writing movies, so Im’ writing them backwards right now.  The Moviefone website at Lawless describes the movie as follows…

“‘Lawless’ is the true story of the infamous Bondurant Brothers: bootlegging siblings who made a run for the American Dream in Prohibition-era Virginia. In this epic gangster tale, inspired by true-life tales of author Matt Bondurant’s family in his novel “The Wettest County In The World,” the loyalty of three brothers is put to the test against the backdrop of the nation’s most notorious crime wave…”

The Review Lawless is a different kind of gangster movie that takes place in the 1930’s, in the back woods of Virginia.  It’s about these three brothers and their father and how their lives revolved around running moonshine during Prohibition and how they didn’t allow the Chicago mobsters to come in and tell them how to run things.

My grandfather actually ran moonshine during Prohibition and was one of the first guys granted a liquor license after Prohibition, so I found it entertaining.  It’s very graphic at times and clearly the people during that time were much tougher in dealing with hardships than we are today.  I don’t think it was a great movie, the acting was very good, the Directing was also pretty well done, but the story was a little dull after a while.

The Critics haven’t been overly excited about this film, but the fans seem to like it.  I liked it, but I would probably wait for the rental on this one.  Becky and Michelle thought the same thing.