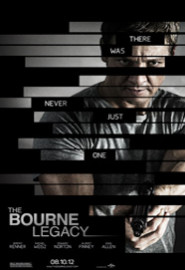 “The fourth installment of the highly successful Bourne series sees the return of the franchise’s screenwriter, Tony Gilroy, this time stepping into the director’s seat for an entry which sidelines main character Jason Bourne in order to focus on a fellow estranged assassin (Jeremy Renner). Edward Norton and Rachel Weisz co-star, with Joan Allen and Albert Finney reprising their roles from the previous films…”

The Bourne Legacy is a new version of the Bourne series with a new star and character, who was the step beyond Jason Bourne, which is hard to imagine.  In this case, our government has altered his body, so that he has genetic mutations to improve his mad skills at being able to seek and destroy.

As you would expect from The Bourne Legacy, there is plenty of action in this film.  There is a major car (motorcycle) chase, that probably went on for too long because the movie is a long movie.  It’s over 2 hours in length, so for some people, including some of my family members, it was too long.

It’s not a kid’s film, it’s definitely PG-13, so be aware of that if you decide to watch the film.  Our children are old enough that they liked it, but there is definitely some violence in the movie, including a very disturbing part that hit a little too close to home with the recent movie theater shooting.

Overall, it’s very well done for what is a sequel to the Jason Bourne Trilogy and if you liked the first Bourne movies you should like this one.  You don’t have to have seen the previous films to understand this one, but they did tie them into this movie.

I thought it was a Don’t Miss It, but I really enjoy the Bourne series.