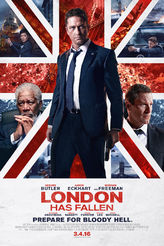 “In this sequel to the 2013 action thriller Olympus Has Fallen, a terrorist plot unfolds in London as a number of politicians gather for the funeral of the British prime minister. A Secret Service agent (Gerald Butler), the U.S. president (Aaron Eckhardt), and an MI-6 operative (Charlotte Riley) must work together to stop the terrorists from assassinating the world’s leaders and destroying the city’s landmarks….”

This is another over-the-top action film that has plenty of action, but lacks plenty of substance.  The story is so predictable and it’s just hard to watch because the odds of success are ridiculous.  The movie is entertaining at times, but maybe we are just spoiled from watching so many far fetched action movies where the “hero” of the film has skills like a Super Hero that it’s just not believable.  That was the problem with this film for us.  At times it was entertaining and other times you were thinking, “There is no way they could have survived that and walked away.“.

Becky and I both thought this film was a Rental, so when it comes out at the rental box or available for download it would be worth watching then.