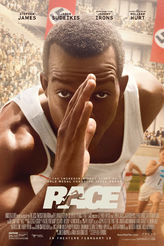 Becky and I went to see the movie Race at the AMC Theaters in Highlands Ranch, CO last Friday night. The Fandango website at Race describes the movie as follows…

“This drama based on true events focuses on legendary black athlete Jesse Owens (Stephan James) and his inspiring journey to overcome racism at home and abroad, culminating in his triumphant track-and-field performance at the 1936 Berlin Olympics under the tutelage of gruff Ohio State coach Larry Snyder (Jason Sudeikis). At the same time, Owens also contends with a rivalry with German competitor Carl “Luz” Long (David Kross), while Olympic committee members Jeremiah Mahoney (William Hurt) and Avery Brundage (Jeremy Irons) deal with Nazi propaganda minister Joseph Goebbels (Barnaby Metschurat) and his desire to make the Games a celebration of Aryan supremacy…”

The Review:  RACE is the true story about Jesse Owens, who was an amazing Olympic athlete who competed in the German Olympics under the Hitler regime.  The movie shows the obstacles that he endured as an African American in America and then going to Europe to compete in the Olympic games.  It shows the evils of prejudice and the amazing endurance and true grit of men like Jesse Owens who were true overcomers.  The film also shows how his coach, Larry Snyder, pushed him to keep his focus on running instead of getting sidetracked by the naysayers and obstacles he was facing at the time.

Jesse Owens was a true American Hero and this movie is very important for people to see, even from an historical standpoint, but also because it shows the importance of standing up in the face of evil and overcoming adversity.  It’s a great movie!  The man had mad skills and was an amazing runner.

The acting is really good, along with the directing.  One element that I really appreciated is that it showed the flaws of Mr. Owens that are common among many men, when fame, power and money come into their lives.  It showed how at times he had very little integrity and at other times he was a great friend.  The movie didn’t try to make excuses for his sins, but instead showed how he had to humble himself and focus on the prize and becoming a champion.

Becky and I both though this film was a Don’t Miss It for sure, so put it on  your list of movies to see.