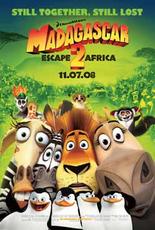 “Alex, Marty, Melman, Gloria, King Julien, Maurice and the penguins and the chimps find themselves marooned on the distant shores of Madagascar. In the face of this obstacle, the New Yorkers have hatched a plan so crazy it just might work. With military precision, the penguins have repaired an old crashed plane sort of…”

The Review
Madagascar: Escape 2 Africa is a funny kids film about some wild animals with human characteristics and plenty of adult humor to keep the parents entertained. The characters are the same as the first film, including the gang of “can do” penguins with attitude. The story focuses on the lion, Alex, again played by Ben Stiller who finds his Dad and Mom upon arriving back in Africa.

There are a few scenes that are bit whacky for a kids film. The hippo, Gloria, discovers that the giraffe is in love with her after she has a date with “Motto, Motto”, the male dominant hippo, who is shallow and only interested in her “huge”, “extra large”, body. It’s pretty funny the way the movie portrays this situation. Our kids were cracking up, but some parents may find that offensive.

The cross dressing King Julian who pops out of the cake and has a giant ego is a very funny character, but some parents may find his zany antics a bit over-the-top. Overall though, the film delivers and is entertaining for a cartoon. The kids liked it and we found it to be a good family outing, which was the goal of the film.

John – *** Worth The Trip Lockjaw: Rise of the Kulev Serpent movie full

John is an auto consultant with JFR & Associates The Green Mile psp in Denver, Colorado. He can help you save time and money on any make or model, new or used, lease or purchase – nationwide! Call or email John about your next vehicle! jboyd@coolcarguy.com