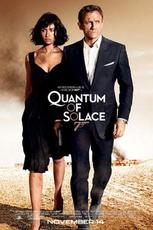 Becky and I went to see the new James Bond flick Quantum of Solace last night in a sold out showing at the AMC theaters in Highlands Ranch, CO. The Fandango movie website at Quantum of Solace describes the movie as follows:

“Following the betrayal and death of Vesper Lynd, James Bond (Daniel Craig) makes his next mission personal. The hunt for those who blackmailed his lover leads Bond to ruthless businessman Dominic Greene (Mathieu Amalric), a key player in the organization which coerced Vesper. Bond learns that Greene is plotting to gain total control of a vital natural resource, and must navigate a minefield of danger and treachery to foil Greene’s plan….”

The Review
Quantum of Solace is the second installment of Daniel Craig playing the role of James Bond. It’s actually a sequel to the first one Casino Royale, which was a total surprise for a Bond movie. I’m a James Bond fan and I think Daniel Craig is the best of the bunch.

Quantum of Solace is non-stop action from start to finish! The start of the movie has Bond in his very cool Aston Martin being chased by an Alfa Romeo, which was definitely one of my favorite scenes in the movie as “The Cool Car Guy”. The Aston Martin is definitely one of my favorite cars, as their website states “An Aston Martin combines three important elements: power, beauty and soul”, making it the perfect vehicle for James Bond. The Alpha Romeo was cool too, but it’s hard to beat the Aston Martin. The chase scene is fantastic except for the fact that I cringed when I saw what happened to his car.

Not only were the cars cool, but Daniel Craig, as James Bond reminds me of the Matt Damon, Jason Bourne, Bourne Identity series of films with way more action than drama. There are a few parts that were way over the top that they could have edited out, such as an airplane dogfight that was ridiculous, but it was still fun to watch.

I really liked Quantum of Solace and totally recommend it, especially for true Bond fans.

Wild at Heart movies in Denver, Colorado. He can help you save time and money on any make or model, new or used, lease or purchase – nationwide! Call or email John about your next vehicle! jboyd@coolcarguy.com