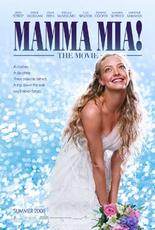 Becky talked me into seeing the new flick at the AMC theaters in Highlands Ranch, Colorado on Friday night. The MSN movie website at Mama Mia! describes the movie as follows:

“Donna (Meryl Streep), an independent hotelier in the Greek islands, is preparing for her daughter’s wedding with the help of two old friends. Meanwhile Sophie, Donna’s spirited daughter, has a plan of her own. She secretly invites to the wedding three men from her mother’s past in hopes of meeting her real father and having him escort her down the aisle on her big day…”

The Review Dead Man movie
is the adaptation of a play for the big screen with an all-star cast. I had no desire to see this film, but Becky talked me into it and since I wanted her to see The Dark Knight, I figured I should be flexible. To my surprise I actually liked Mama Mia!. Although, I can’t get some of the songs out of my head, which could be a side effect if you see this movie.

It’s not your typical musical where people just break out into song for no apparent reason, but it’s more like Grease where the songs are stationed at the right place in the movie. Meryl Streep is amazing in this movie and she will probably win the best actress award from the Academy this year for this performance. The music is also good, even if you’re not an Abba fan, you will recognize the songs.

Hollywood had to make sure they put in the token gay guy, but it doesn’t take away from the film. The movie is done well and Becky liked it enough that after the film she said she wanted to buy the DVD when it comes out. I wasn’t quite there, but I did like it enough to recommend it as a break from the super hero genre.