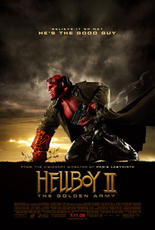 I took the boys to see at the Kerasotes theaters in Castle Rock, Colorado on Saturday. The MSN movie website at Hell Boy II: The Golden Army describes the movie as follows:

“After an ancient truce existing between humankind and the invisible realm of the fantastic is broken, hell on Earth is ready to erupt. A ruthless leader who treads the world above and the one below defies his bloodline and awakens an unstoppable…”

The Review
is the sequel to the first Hell Boy movie starring Ron Perlman as a demon turned super hero for the U.S. Government. The premise is nuts, there is nothing theologically correct about this film, it’s just a crazy story about a demon who comes through a portal opened to the Underworld during World War II when Hitler was tapping into the occult in an attempt to take over the world.

Fast forward and Hell Boy is all grown-up and more human than he is monster from beyond. He’s fallen in love with a woman from the first film who has the ability to create fire when she gets angry and he once again is called on to save the world. This time though he has to battle a super Elf from a previous era of time on the planet, who is ready to destroy the world with his unstoppable Golden Army.

Hell Boy II: The Golden Army is pretty nuts and you may not like it. It’s a bit boring since it’s one more super hero movie and there have probably been too many of these this Summer. I liked it because the action is pretty good, the production design is wild looking and the creatures and special effects were awesome. However, it’s not a movie for everyone. I can’t recommend it for most people. The boys and their buddies sure liked it, more than I did. There are some really stupid aspects to the story itself that I didn’t like and that I thought could have been way better.