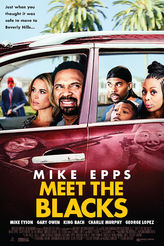 Becky and I went to see the movie Meet The Blacks at the AMC Theaters in Highlands Ranch, CO last night with our friends Mark and Maria.  The Fandango website at Meet The Blacks describes the movie as follows…

“After obtaining a great deal of money, the patriarch (Mike Epps) of a black family decides they should move from Chicago to a posh neighborhood in Beverly Hills. However, they are soon terrorized by home intruders who want them out of the affluent community in this comedic spoof of the Purge films….”

The Review:  Meet The Blacks was a film that we really knew nothing about and found out at the last minute that it was a comedy.  It’s about an African American family who’s last name is Black and the Father comes into some money from an illegal drug deal in Chicago and move his family to Beverly Hills.  It just so happens that right after they move into their new house, it is the night of the Purge, another stupid movie that we have never seen about crime including murder being legal one night a year.

The writers of Meet The Blacks must have thought the idea for The Purge was stupid as we do since they made this film to make fun of it.  Unfortunately, it just turned into another bad movie.  The whole movie is filled with people using the “n” word as though it’s a term of endearment and it is filled with inappropriate and racist jokes.  There are a few good laughs, but it’s really like a horror movie comedy and just terrible.  Becky fell asleep for most of it and Mark and I walked out shaking our heads about how stupid it was.  Maria didn’t like it and there isn’t really much more to say about it.

This is definitely a Don’t Bother in our opinion.  It was just too stupid and wouldn’t be worth watching even if it was on t.v. for free.