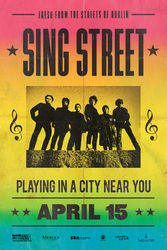 Becky and I went to see the movie Sing Street at the AMC Theaters in Castle Rock, CO last night.  The Fandango website at Sing Street describes the movie as follows…

“After his parents’ money woes force him to transfer schools, shy Dublin teenager Conor (Ferdia Walsh-Peelo) finds himself as an outsider at the rough-and-tumble new academy. One day, he spots the trendy Raphina (Lucy Boynton), and unable to think of a reason to talk to her, asks her to star in the first music video for his band. She agrees, but Conor is in a bind given the fact that his band does not yet exist…”

The Review:  Sing Street is a quirky movie about an Irish teenager who is struggling with his school and friends to find his identity.  He decides to start a band because he wants to impress an older girl in his neighborhood, but he has no experience in music.  He recruits some friends and forms a band and then starts making music videos and writing songs.

The story shows his life with his family and his brother and it’s as much about him and his brother as it is about the boy himself. His brother is a stoner and his family is dysfunctional, but his brother keeps encouraging him that he can be a singer in a band and be successful.  The film is actually really good even though it’s a low budget production, we thought it had a great deal of heart and it was enjoyable as well as entertaining.

Becky and I both liked this movie and it has some good music from the 1980’s, some good jokes and shows the challenges of teenagers growing up in Ireland as poor kids with little opportunity.  We thought it was Worth The Trip and will definitely make for a good rental.