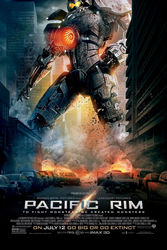 I went to see Pacific Rim last week at the Regal Theater in Lone Tree, CO with Corban and his friend Noah.  The Fandango website at Pacific Rim describes the movie as follows…

”When legions of monstrous creatures, known as Kaiju, started rising from the sea, a war began that would take millions of lives and consume humanity’s resources for years on end. To combat the giant Kaiju, a special type of weapon was devised: massive robots, called Jaegers, which are controlled simultaneously by two pilots whose minds are locked in a neural bridge. But even the Jaegers are proving nearly defenseless in the face of the relentless Kaiju. On the verge of defeat, the forces defending mankind have no choice but to turn to two unlikely heroes—a washed up former pilot (Charlie Hunnam) and an untested trainee (Rinko Kikuchi)—who are teamed to drive a legendary but seemingly obsolete Jaeger from the past. Together, they stand as mankind’s last hope against the mounting apocalypse…”

The Review:  Pacific Rim had a set of Previews that made me laugh the first time I saw them and I thought, “What is this movie Godzilla meets Transformers?  That movie looks terrible.”.

However, when I found out that Guillermo del Toro did the movie, the guy who Directed Hell Boy and Pan’s Labyrinth, I figured I would go and check it out.  So, I talked Conroy and his buddy Noah into going with me last week.  I asked Corban too but he said, “No way, it looks stupid.” and I wasn’t about to get Becky to go since she hates science fiction films, even with Tom Cruise in them.  Someone also told me that they spent close to $200 million on the film, which made me think that I could spend $5 to go see it and see what $200 million did.

Believe it or not, this movie was really cool.  I thought it was going to suck, as I already mentioned, but it was much more than Godzilla meets Transformers.  The robots were really amazing and they required two people to pilot them, by doing some kind of a “brain merge” that used half of the brain of each pilot to use the robot, which added another dynamic to the film.  The special effects were fantastic, the story was really good with alien creatures that had come through a portal deep in the ocean.  Each monster was rated like a Hurricane, Class 1 to Class 5 that was clever and they were adapting to the robots fighting skills.

Yeah I know, it still sounds kind of stupid, but there are not any big name actors in this movie and they do a great job pulling this movie off because the story and characters are very entertaining and fun. Conroy, Noah and I all liked it and thought it was definitely worth the trip.  Conroy and Noah said it was a Don’t Miss It and I was close to being there with them.

If you don’t like fantasy or sci-fi movies you probably won’t like this, but I’m not so sure about that because I think Becky would have liked it.  It’s definitely Worth The Trip to see Pacific Rim.  Check it out on the Big Screen before it leaves the theaters.