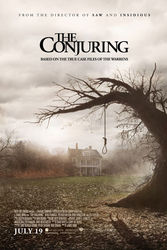 I went to see The Conjuring last week at a movie theater in Durango, CO with Corban and Conroy, who talked me into taking them to see it.  The Fandango website at The Conjuring describes the movie as follows…

”Before there was Amityville, there was Harrisville. Based on a true story, “The Conjuring” tells the horrifying tale of how world renowned paranormal investigators Ed and Lorraine Warren were called upon to help a family terrorized by a dark presence in a secluded farmhouse. Forced to confront a powerful demonic entity, the Warrens find themselves caught in the most terrifying case of their lives…”

The Review:  The Conjuring is a creepy horror movie that takes place in the 1970’s in an old farm house that a family purchases to start a new life only to encounter a demonic entity that wants to kill them.  It opens up by explaining that the story is based on true events from the case files of Ed and Lorraine Warren, who were probably the first paranormal investigators back when chasing ghosts was viewed as whacky.  Most of these movies are incredibly far-fetched, with liberties on what is really “true”, so I did some checking after seeing this flick and discovered an interesting website dedicated to horror movies.

The website owner was a guy who was wondering the same thing as me and put out a request to find out of how true this story really was or if it was just another Hollywood “conjuring”.  It turns out that he heard back from one of the girls, who actually lived this demonic nightmare and she said that it’s entirely true, other than a few small parts and that there were even more things that happened than what was in the movie.  You can read his article here.

Anyway, I’m always fascinated by these kind of supernatural horror movies that are based on a true story, having had my own supernatural encounters in the past.  I have probably mentioned this before, but I spent the night in a haunted cemetery in Hudson, Wisconsin on three different occasions and had some strange happenings.  I’m also a Christian and I know that as Verbal in The Usual Suspects said it best “The greatest trick the Devil ever pulled was convincing the world he didn’t exist“.

This movie brings the Devil and his evil entourage of demons to light and moves them out of the darkness.  It really demonstrates how much these evil beings really want to steal, kill and destroy mankind.  When given the opportunity they will kill you.  I won’t share all the details here of a story about a friend of mine in High School who had a demon come right up out of the flame of a candle, look directly at him and say, “I’m going to bury you.“, but I can tell you that it definitely tried more than once and by now it may have succeeded.

This movie was done extremely well.  It’s scary, but also rather fascinating and sucks you into the family and the diabolical entity trying to destroy them.  The history of the farmhouse, the prior murders, hangings, ghosts and the evil that transpired is really crazy to watch on the big screen.  Corban was white knuckling his seat like an amusement park ride and I have to admit that I got sucked into the film as well.  Conroy wasn’t as freaked out by it, but he loved it and said it was the best scary movie he had ever seen.  The fact that it is based on a true story really made the film in my opinion.

I have to rate this a Don’t Miss It and Conroy and Corban agree, even if you’re not a fan of supernatural horror flicks, you should go see this one, it’s pretty wild.