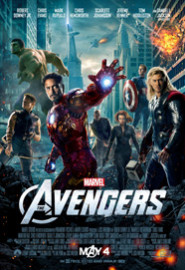 Becky and I took the kids to see the movie The Avengers at the AMC Theater in Highlands Ranch, CO last week.  The Fandango website at The Avenger describes the movie as follows…

“Marvel Studios presents ‘Marvel’s The Avengers’–the Super Hero team up of a lifetime, featuring iconic Marvel Super Heroes Iron Man, The Incredible Hulk, Thor, Captain America, Hawkeye and Black Widow. When an unexpected enemy emerges that threatens global safety and security, Nick Fury, Director of the international peacekeeping agency known as S.H.I.E.L.D., finds himself in need of a team to pull the world back from the brink of disaster. Spanning the globe, a daring recruitment effort begins…”

The Review
The Avengers is a great comic book super hero action flick movie.  It’s a massive thrill ride from beginning to end.  The characters are many that we’ve seen before such as Iron Man, the Hulk, Thor and Captain America, plus a few more to create the amazing team of Avengers.

The movie is very well done and super exciting.  It opened up with the greatest box office opening ever in the United States with over $200 million in ticket sales the first weekend, so many of you reading this have already seen this film.  What I liked about it is how true to the comic book genre it is.  It’s like watching an actual comic book come to life with great characters, fantastic villains, a good story with great lines for the characters and super chemistry between the actors.

This movie is definitely one of the best blockbusters of the year and many people will be seeing it multiple times.  There were be several clips that you have to stay for after the credits, like most Marvel movies.