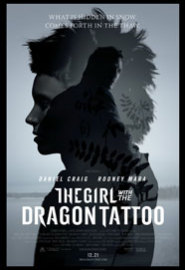 “A discredited journalist (Daniel Craig) and a mysterious computer hacker discover that even the wealthiest families have skeletons in their closets while working to solve the mystery of a 40-year-old murder in this David Fincher-directed remake of the 2009 Swedish hriller of the same name. Inspired by late author Stieg Larsson‘s successful trilogy of books, The Girl with the Dragon Tattoo gets under way as the two leads (Daniel Craig and Rooney Mara) are briefed in the disappearance of Harriet Vanger, whose uncle suspects she may have been killed by a member of their own family. The deeper they dig for the truth, however, the greater the risk of being buried alive by members of the family, who will go to great lengths to keep their secrets tightly sealed…”

The Review
The Girl With the Dragon Tattoo is taken from an International best selling book trilogy with the first book being of the same name.  It was made as an Independent film with subtitles that Becky and I saw a couple of years ago and it was pretty awesome at that time because the story has so many interesting characters and plot twists.  However, it was extremely graphic the first time around and it’s even more graphic this time.  This is a film that will not appeal to everyone with a great story, but it’s so graphic that it’s extremely disturbing.

Let me put it into perspective for you before you go to this film and are shocked.  It is rated R for – Graphic Nudity, Brutal Violent Content, Torture, Language, Rape and Strong Sexuality and it lives up to all of those reasons for the rating.  At times it’s more X Rated than R rated, which was very disturbing.  I think the Director could have done an Alfred Hitchcock “Psycho” type scene instead of showing the sick aspects of the characters on the screen and accomplished the same effect.

The acting is very good in this movie.  The characters are fascinating and the story is what makes this such a good trilogy.  However, it’s not a light hearted film or a movie for everyone.  It’s a graphic and disturbing detective film and psychological thriller.

Becky and I knew what to expect from seeing the Swedish version of the movie and we liked it.  I know some people who have opted to read the books instead of seeing the movie.  It definitely lives up to the expectations of the people who are familiar with the books and the movies.  If you can get past the extremely disturbing scenes, the movie is worth the trip.  If you cannot, and I know some people who told me they won’t see it because of the graphic scenes in the film, then you had better skip it and put this one on the Don’t Bother list.