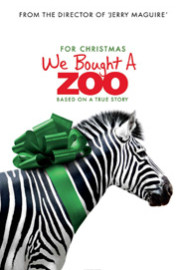 Becky and I took the kids to see the new Matt Damon film We Bought A Zoo tonight at the AMC Theater in Castle Rock, CO.  The MovieFone website at We Bought A Zoo, describes the movie as follows.

“A widower (Matt Damon) purchases a zoo in order to bring his family back together in this Twentieth Century Fox adaptation of Benjamin Mee‘s autobiographical memoir. Cameron Crowe (Almost Famous) writes and directs based on a script by Aline Brosh McKenna…”

The Review
We Bought A Zoo didn’t impress the movie critics for some reason and also a number of people who wrote comments at MovieFone and Fandango as well.  I think people were expecting a comedy based on the name of the film, since it sounds light hearted and funny.  However, this is a Drama about a guy who has lost his wife and is raising their two young children, while his career is coming to an end as an Adventure Writer for a newspaper.

The story is very touching and deals with the struggles that this family experienced in trying to do something that they had absolutely no experience in doing, owning a Zoo.  Granted, the character had some money to get started and it was pretty cool how they all pulled together to try to save the animals and the Zoo, while in the process trying to make something great for their local community.  The film has a great deal of heart and it will pull at your heart strings to try to pull a tear or two as you watch the family dynamics and challenges of the characters unfold in this unique adventure story.

Besides taking our three children to see the film, we also went with our two nephews Aidan (11) and Brendan (14) and everyone really liked this film.  Corban didn’t like it as much as the rest of the kids, but he had a bad attitude going into it and didn’t want to see it to begin with.  He said after the movie, “It was better than I expected, I would rate it a good rental”, but everyone else thought it was definitely a Don’t Miss It or at the very least Worth The Trip.