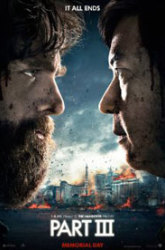 Becky and I went to see The Hangover Part III a couple of weeks ago at the AMC Theater in Castle Rock, CO. The MovieFone website at The Hangover III describes the movie as follows…

“”The Hangover Part III’ is the third and final film in director Todd Phillips’ record-shattering comedy franchise. This time, there’s no wedding. No bachelor party. What could go wrong, right? But when the Wolfpack hits the road, all bets are off….”

The Review:  The Hangover Part III is the final installment of the Trilogy about the “wolf pack”, the three guys who go to Las Vegas in search of fun and excitement only to end up in a situation of Mayhem.  The first one was the best of the three, the third one doesn’t save the second one, it’s just too much of the same characters doing the same stupid things.  That’s the problem with sequels though since all too often you’re hoping for something different and you just get more of the same.

There are a few funny scenes in this movie and some that are disturbing.  The initial story in the film is completely over-the-top and if you’re an animal lover you’re not going to like the scene with the giraffe, but it’s funny only because it is totally ridiculous.  It doesn’t really get much better though and that’s the problem with this movie is that it’s just so far fetched from a comic standpoint that it’s hard to watch.  One of the lead characters uses the “F” word about every other sentence too that is very annoying.

The movie is not terrible, but it’s not very good either.  We would have to rate it as a Don’t Bother or being a Rental at best.  I rarely agree with the professional movie critics, but in this case I have to agree since most of them gave it 1 1/2 stars and we’re going with 2 stars at the most for this one.