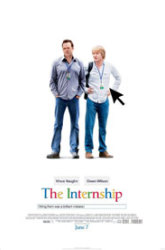 Becky and I went to see The Internship last Weekend at the AMC Theater in Las Vegas, NV with our kids Conroy, Corban and Bianca. The MovieFone website at The Internship describes the movie as follows…

The Review:  The Internship is a pretty funny movie about two guys who lose their job and go to try to work for Google as Interns, but have no clue about technology.  The film has Vince Vaughn playing his usual carefree, clueless self and Owen Wilson doing pretty much the same thing, like a modern Laurel and Hardy duo.  They are pretty much the same characters that were in Wedding Crasher and it’s not nearly as funny as that film.  There are some good lines though, but if you’re not a technology buff at all, you may not find it very funny and a bit too predictable.

They have the bar, stripper scene that wasn’t necessary with some other parts of the film that were not really needed.  The biggest problem with the film is it’s really a massive PR Campaign for Google, making Google look like the greatest place to work in the world.  As if everyone would want to work for Google, which is hardly the case.  I know I have zero interest in working for Google, especially with the whole Privacy Issue and how these large technology companies are collecting and releasing data to the Government on everyone, which is totally uncool.  They definitely left that out of the movie.

The movie was entertaining though and we all liked it and thought it was fun.  They should have left out the bar scene and some of the other more adult humor in the film, which wasn’t necessary to make it work.  Other than that, it’s a typical Vince Vaughn movie, so it’s not going to win any awards but will make you laugh.