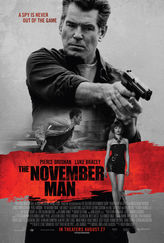 “A legendary ex-CIA agent emerges from retirement to protect a witness, but his mission lands him in the sights of his former protégé in this cat-and-mouse spy thriller based on the novel There are no Spies by Bill Granger. Having serves the CIA loyally for years, Peter Devereaux (Pierce Brosnan) retreates to Switzerland to live out the rest of his days in peace. Peter finds himself drawn back into the fray…“

The Review:  The November Man is a bit like those movies that Clint Eastwood used to make when he was too old to be doing the things he was trying to do at the time.  Now we have Pierce Brosnan doing the same thing as an old 007 type working for the CIA.  The movie has an okay story and the acting is okay, but not really that great since Pierce plays the same character all the time.  The movie just didn’t do it for us and reminded us of watching a remake of a James Bond film.

The story is just too far fetched at times with people running around shooting people and the police never show up.  The characters end up outsmarting the CIA, the Russians and everyone involved that is chasing them with a bit of the Jason Bourne feel to it.  In this case, it was “Peter Bored” since the character Peter Devereaux was just too boring.  Becky ended up falling asleep.  I would have to say that this is a Rental for sure and since Becky slept through most of the movie it was a Don’t Bother for her.