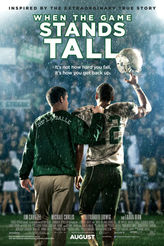 The Review:  When The Game Stands Tall is a typical sports movie about a football program and a coach who has a different approach to winning.  We went into this movie with really low expectations since most sports movies are pretty terrible.  The fact that it had a Christian spiritual element to it made me think it was going to be even worse, since most of those films are just a little too campy.  I’m a Christian, but I’m not a huge fan of most Christian movies.  We were pleasantly surprised.  The closest movie that I could use to describe this film as far as the way it was done with quality content is Blindside with Sandra Bullock.  If you haven’t seen that movie, you should watch it.  It’s a good sports film too.

This movie is done extremely well.  The story is great, the acting is good, it was emotional for a football film and it had a really super message about life and the choices that we make as individuals.  The film was very inspirational and we both really liked this movie.  This is the kind of movie that will have you leaving feeling good and glad that you spent the money to go and see it.  The fact that it was based on a true story made it even better.