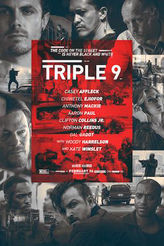 Becky and I went to see the movie Triple 9 at the AMC Theaters in Castle Rock, CO on Tuesday night. The Fandango website at Triple 9 describes the movie as follows…

“Ex-soldiers Michael Atwood (Chiwetel Ejiofor) and Russel Welch (Norman Reedus) lead an Atlanta criminal organization, which also includes Welch’s troubled brother Gabe (Aaron Paul) and dirty cops Marcus Belmont (Anthony Mackie) and Jorge Rodriguez (Clifton Collins Jr.). The five heisters are contracted by the Russian-Israeli mob, headed by matriarch Irina Vlaslov (Kate Winslet), to pull off a dangerous job, and they decide to create the diversion of an “officer down” call as a cover for the robbery….”

The Review:  Triple 9 is a cop movie that is similar to many of the hundreds of other cop movies that have been made over the years.  It’s very violent with murder, drug dealers, bank robberies, the Russian mafia and all the typical evil that is found in other police films.  It just seemed to have much more going on since some of the cops are bad and willing to commit murder for money.  The acting is good with several famous actors, including Kate Winslet and Woody Harrelson.  Several of the characters are not believable.

The story wasn’t terrible, but it wasn’t great either.  It was a bit too predictable for me and Becky too and it’s a pretty long film at just under 2 hours or maybe it just seemed long because it moves pretty slow, even though there is quite a bit of action.  In the end, the movie is done pretty well, but it is somewhere between a rental and being worth the price of admission.

Becky rated it a Rental and I thought it was Worth The Trip, so it’s probably somewhere in between the two of our opinions.