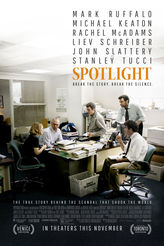 Becky and I went to see the movie Spotlight at the AMC Theaters in Highlands Ranch, CO when it first came out and I had forgotten to write a review about it and then it ended up winning the Oscar for Best Picture. The Fandango website at Spotlight describes the movie as follows…

“Under the direction of new editor Marty Baron (Liev Schreiber), the Boston Globe’s elite investigative team, known as Spotlight, is tasked with delving into decades’ worth of child-abuse claims against the Catholic Church. Led by Walter “Robby” Robinson (Michael Keaton), the journalists begin to uncover a massive scandal involving sexual abuse and the willful ignorance perpetrated by the Church within the city of Boston. Facing political opposition and resistance from the far-reaching influence of the Church, the reporters put together an explosive exposé on a corrupt system. Directed by Tom McCarthy and based on the true events of the 2002 investigation by the Globe…”

The Review:  Spotlight was a great movie, but it’s pretty disturbing because it shows how a community can come together to protect its secrets.  It deals with the touchy subject of child-abuse within the Catholic Church and how the church went out of its way to not just deny the allegations, but to cover them up.  I grew up as a Catholic and I have a family with a long history of Irish and Scotch-Irish Catholics, along with many Catholic friends.  This movie is very difficult to watch because you can see how people are willing to believe a lie rather than acknowledge the truth that some people are diabolical and evil.

The movie is very well done because it shows the victims of people in power and authority.  I was surprised that it won the Oscar and I really didn’t expect it to win.  I wasn’t surprised by the quality of this movie since it has a great cast, fantastic acting and directing.  It was a very moving and powerful true story that needed to be shared with the public.  The film doesn’t make an assault on Catholics as believers, but on Priests and the Catholic leadership who were and are willing to cover up their sins rather than to confess them.  That is nothing knew as we know from History that Jesus was killed by similar religious leaders seeking position over people.

Becky and I remember leaving the movie thinking, “That was a great movie, even though the topic is hard to swallow.”  It is definitely one that you will want to put on your list as a Don’t Miss It.