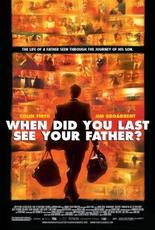 “As poet Blake Morrison (Colin Firth) visits his dying father (Jim Broadbent), he remembers the feeling of being overshadowed by his gregarious dad. Blake’s conflicted memories roam back and forth through the 1950s, the ’60s and then the late ’80s , the last in which Blake is a married man with a career of his own.”

The Review
is a touching story about a guy who is dealing with the death of his father and looking back on his childhood as his father dies from cancer. He realizes how much he hates his Dad and he’s not sure why after a great deal of self evaluation, but he believes one reason is because his Father cheated on his Mother with her sister.

When Did You Last See Your Father is a pretty strange flick in that this guy has his own family and seems to be very good at judging his Dad’s life when his Dad clearly invested a ton of time into his son and at the same time he ignores his own children during the entire film. Becky and I were amazed at how the guy treated his wife and kids while throwing a pity party about how his Dad treated him.

I don’t want to be too harsh on the guy in this true story, but it was a bit ridiculous on how he dealt with the death of his father without focusing on his family that was living. In spite of that the movie had a redeeming quality to it as he is reconciled to his father at the end of his life. It also showed the importance of not waiting until your family member is on their death bed to be reconciled to them and putting the past behind you.

Overall, we both liked it, but we would recommend saving it as a good rental when it comes out.