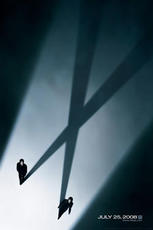 Becky and I went to see the new X-Files film last Sunday at the Kerasotes theaters in Castle Rock, CO. The Fandango movie website at X-Files: I Want to Believe describes the movie as follows:

“David Duchovny and Gillian Anderson reprise their roles as Fox Mulder and Dana Scully with this long-delayed big-screen continuation that revives the series six years after it headed off the air in 2002. Creator Chris Carter returns to direct, co-writing the script with series veteran Frank Spotnitz for 20th Century Fox. Billy Connolly, Amanda Peet and rapper Xzibit co-star in the stand-alone sequel. ~ Jeremy Wheeler, All Movie Guide”

The Review
X-Files: I Want to Believe is like a classic X-Files television episode only without the space aliens this time around. The story is really crazy, it’s a murder mystery about a serial killer who is using experimental technology out of Russia to transplant human organs for his own self-interest (to keep his lover alive).

The story definitely will keep your interest since you’re wondering what is going on and it’s totally insane taking you into the depravity of human beings who have sunk so low they will kill people for their body parts. It’s much more believable than the search for an alien life form type X-Files movie and downright scary to think that there is a black market for human organ transplants.

However, a quick search on Google will take you to articles like this one The Black Market in Human Organs

Charlie and the Chocolate Factory buy

about how their is a thriving black market for buying and selling organs like someone would sell their car or their home. Personally, I’ve always believed that doctors, hospitals and all other parties involved should not be allowed to profit off of organ and tissue donations and this would be a non-issue, but that would just make too much sense wouldn’t it?

Back to the X-Files movie… There is plenty of suspense and a definite thriller of a flick at the box office. If you’re an X-Files fan you should like it, unless you’re looking for ET because he isn’t in this one.