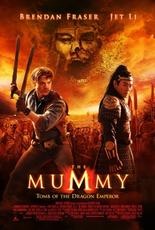 Becky and I took the kids to see the new film this weekend at the Kerasote theaters in Castle Rock, CO. The Fandango website at The Mummy: Tomb of the Dragon Emperor describes the movie as follows:

“Brendan Fraser returns as explorer Rick OConnell to combat the resurrected Han Emperor (Jet Li) in an epic that races from the catacombs of ancient China high into the frigid Himalayas. Rick is joined in this all-new adventure by son Alex (Luke Ford), wife Evelyn (Maria Bello) and her brother, Jonathan (John Hannah). And this time, the OConnells must stop a mummy awoken from a 2,000-year-old curse who threatens to plunge the world into his merciless, unending service. Doomed by a double-crossing sorceress (Michelle Yeoh) to spend eternity in suspended animation, Chinas ruthless Dragon Emperor and his 10,000 warriors have laid forgotten for eons, entombed in clay as a vast, silent terra cotta army. But when dashing adventurer Alex OConnell is tricked into awakening the ruler from eternal slumber, the reckless young archaeologist must seek the help of the only people who know more than he does about taking down the undead: his parents….”

The Review
The Mummy: Tomb of the Dragon Emperor is the latest installment of the Mummy series and I honestly didn’t think it could be as bad as the last one, but I was completely wrong. The Mummy: Tomb of the Dragon Emperor is in the top 10 for the worst movie of the year. I heard the one of the former cast members refused to be a part of this movie once she read the script and all the other cast members should have followed her lead.

How bad is this movie? It’s so bad that Conroy looked at me about 45 minutes into the film and said, “Dad, this isn’t even a good rental”. Becky fell asleep, Bianca got up and left about five times to get candy and popcorn and I even left a couple times to make phone calls. We should have told management how bad it was and gotten our money back, but none of us knew really how bad each other disliked it until it was over.