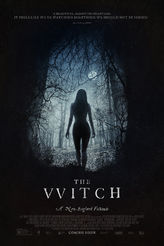 Becky and I went to see the new movie The Witch at the Alamo theaters in Littleton, CO on Friday with our friends Mark and Maria. The Fandango website at The Witch describes the movie as follows…

“A devoutly Puritan family in 1630s New England is exiled from their village and struggle to survive in their new home situated on the edge of a mysterious wilderness. The sinister, witching forces in the wilderness emerge silently to terrorize the family, first by stealing the youngest of their five children. As their life-sustaining crops fail, the family falls victim to paranoia and fear as they begin to turn on one another, suspecting young teen Thomasin (Anya Taylor-Joy) of witchcraft. With the vast majority of the dialogue culled from primary sources of the time period, Robert Eggers’ shocking debut horror feature is a terrifying glimpse into a family descending into madness…”

The Review:  The Witch is a really bizarre horror movie about a family in the 1600’s that is banished from their village to go find a place of their own with their family.  As the description explains, they situate their family next to a dark forest and strange things start happening to the family.  Initially, a baby is stolen and and the oldest daughter is thought to be the prime suspect.  It goes down hill from there though as the family is torn about by supernatural events.

This movie has been getting great reviews from a number of people, but others felt the same way that we did.  This movie was terrible.  It was not only boring, but it was disturbing with people being murdered, animals abused and characters that were total misfits in a world they didn’t understand.

It was good verses evil, but there wasn’t anything good in this movie or about this film.  Becky said it was quite possibly the worst movie she has ever seen and our friends Mark and Maria felt the same way.  It was a complete waste of time.

We all rated the movie The Witch as a Don’t Bother.