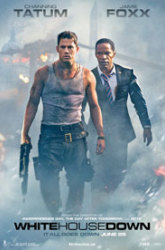 ”’In Columbia Pictures’ ‘White House Down’, Capitol Policeman John Cale (Channing Tatum) has just been denied his dream job with the Secret Service of protecting President James Sawyer (Jamie Foxx). Not wanting to let down his little girl with the news, he takes her on a tour of the White House, when the complex is overtaken by a heavily armed paramilitary group. Now, with the nation’s government falling into chaos and time running out, it’s up to Cale to save the president, his daughter, and the country…”

The Review:  White House Down is a movie that I could have swore I saw just a couple of months ago called Olympus Has Fallen, so I went and did a search at BoydFlix.com and low and behold I did write a review about that movie.  This is one of those “Who Wore It Best” films since it’s almost the exact same movie that we just saw back in April.  I guess Hollywood is out of ideas again!  The difference this time though is that the main character wants to be a Secret Service Agent where the last character already was a Secret Service Agent.  And instead of the White House being taken over by foreigners it’s now an inside job with disgruntled Americans.  Also, the President is more like President Obama than George Bush in this version too, he might even be a smoker.

White House Down is entertaining, but it’s also so far fetched and the Channing Tatum takes about the same amount of abuse as Superman did in his latest film.  He didn’t crash through buildings, but he does fall off of them and is like a Timex, where he “takes a licking and keeps on ticking”, which gets old after awhile.  If you get beat up and thrown through a plate glass window onto a table and jump out a building, you can’t just keep running like nothing has happened.  Life just doesn’t work that way, so be prepared for some ridiculous action scenes.  It does still have some entertainment value, but I don’t think it’s worth the price of admission.

Becky and I are going to have to go with Rental on this one the same that we did with the previous version.  We have to be fair to all the actors, so that we are politically correct.